Mary Hamilton (1756-1816) was one of the most well-connected and highly cultured women in eighteenth-century British polite society. Highly educated as a child, she lost her father at the age of fifteen and spent her adolescence between the homes of her mother and of various relatives and guardians. 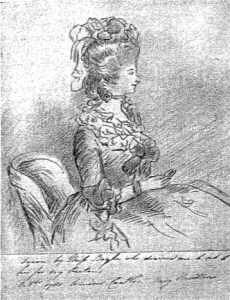 As a young woman, she was recruited as a royal governess by Queen Charlotte, who showed great trust in her – despite the fact that Mary was pursued amorously by the young Prince of Wales, with whom she managed to maintain a chaste friendship. After leaving St James's Palace in late 1782, Hamilton became a member of the Bas Bleu (Bluestocking) circle; she counted Hannah More, Frances Burney, the Duchess of Portland, Mary Delany and Eva Maria Garrick among her literary friends. She dined frequently at the houses of Sir Joshua Reynolds and Horace Walpole and met Samuel Johnson on several occasions. Throughout this time, she maintained a meticulously detailed diary, recording her daily activities, conversations and private thoughts. She had lifelong friendships with a number of female friends, and a fond and mutually supportive relationship with her uncle Sir William Hamilton, ambassador to the Court of Naples, an art collector possibly best known for his second wife’s relationship with Nelson.

In 1785 Mary Hamilton married John Dickenson (c1757-1842), only son of John Dickenson of Birch Hall, near Manchester. Mary’s husband was quickly accepted into her social circles. They had one child, Louisa, born 1787, and lived variously in Taxal (near Chapel-en-le-Frith, Derbyshire), Leighton Buzzard, and London. Mary Dickenson (née Hamilton) fell ill and died in 1816.