Today is a special day in the Team Hamilton calendar, as we wish our Mary (or Miranda to her friends) all the happy returns of her 266th Birthday! Mary Hamilton was born on 5th February 1756, the only child of Charles and Mary (née Dufresne). The Hamilton Papers include a great many birthday greetings, which show the nature of Hamilton’s relationships with key correspondents in the archive, at key stages in her life.

At the age of 21 Mary Hamilton had joined the royal court as a sub-governess to the younger princesses, where her presence was much valued by her colleague Martha Goldsworthy, who writes on Mary’s birthday in 1778:

Had I Mr Glover’s pen I should express my wishes more elegantly, but not with more sincerity than I do with my own my Dearest Miss Hamilton, be assured that nobody more ardently wishes you every possible felicity, & I hope that every year will bring more comfort

Miss Goldsworthy compares herself to Mary’s friend, the poet Richard Glover, in a faux-modest pose that abandons claims to elegance in favour of ardent ‘sincerity’.  It’s also a strangely paranoid comparison of one of Mary’s long-standing family friendships with her own: was Miss Goldsworthy acutely conscious that Mary had a life beyond court that she missed? While Miss Goldsworthy may have wished Mary years of comfort and felicity, Mary's role at court involved long, tiring hours and limits on her freedom. The frequent illnesses of her colleagues and superiors would often mean Mary would have to extend her attendance, cutting into what limited free time she had. Birthdays were no exception, as the following note from their superior, Lady Charlotte Finch, shows:

My dear Miss Hamilton, I was just writing a Note to Miss G. to excuse my Attendance at the Queen's House, & have given a Description of myself that I will not repeat to you, as you have seen Devaynes [the doctor], who says ‘tis absolutely necessary for me to take some care of myself & keep house a little.

Lady Charlotte’s absence would mean additional work for Mary (and Miss Goldsworthy, who was also frequently ill herself), and the celebration of personal milestones was secondary to the needs of the Royal Family Mary was there to serve.

Mary Hamilton’s 26th birthday, in 1782, was the last she would spend in court service. Although she had been at court for almost five years, by November she would leave and set up home with her friends Anna Maria and Isabella Clarke. Anna Maria’s letter of 5 February 1782 alludes to her hope for a long continuance of their friendship, perhaps with a view to their future plans of living together:

This day must not pass my ever dear & amiable friend without a Line from me yet I shall express to my dearest friend very imperfectly the pleasure I feel in reflecting that it is her Birthday.

May this day often very often return & always be attended with pleasing reflexions to yourself as it will ever be dear to all who love you, among these am I too ambitious in desiring to be numbered? with those near your heart? 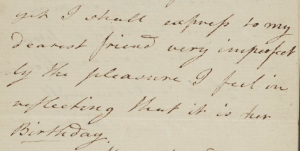 After leaving court Mary had at last had the freedom to spend her birthday with friends and family, writing to John Dickenson in 1785 (a few months before their marriage), ‘I return You my best acknowledgements my Dr friend for ye kind wishes You sent me on ye return of this day — Yours are not ye only ones wch claim my gratitude’ (HAM/2/15, Mary Hamilton to John Dickenson, 2 February 1785). She goes on to describe a morning spent with ‘the dear sisters’ Isabella and Anna Maria Clark, and her plan to visit her cousin the Viscountess Stormont in the evening.

Future birthdays, as Mary was acutely aware in early 1785, would be spent as Mrs Dickenson. Examples of John Dickenson’s birthday greetings to Mary continue in the archive beyond courtship into their happy marriage, and birthdays gave him an ongoing excuse to lavish elaborate praise on his beloved wife. On her 44th birthday in 1800, he writes to his ‘dearest wife’ that

It would greatly enhance my present felicity to be able to express to you, (who are the Cause of it) in terms equal to the warmth of my feelings, how sensible I am of the Blessings I enjoy from an Union with You –
Mankind would be still more attached to this Earthly State could every Individual after the experience of more than fourteen Years, with equal sincerity & satisfaction as myself, hail with Joy the return of that day on which his Wife was born – May You most amiable of Women & Best of Wives live many Years, and continue to afford to our Daughter a bright example of every moral Virtue, unaffected Religion & perfect Consistency of Character & diffuse around you Cheerfulness & agreeable & natural pleasure to those who are so happy as to enjoy yr society and I could almost add perfect Bliss to the Man who doats upon you & who’s greatest Pride is to have it in his power to subscribe himself
Your affectionate Husband 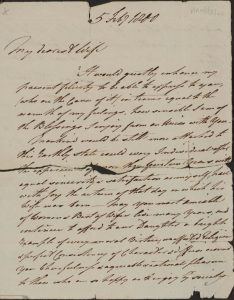 Both the letter from Anna Maria in 1782 and John Dickenson in 1800 share the common pose of their own wish of expressing their feelings, their inability to perfectly do so, and their desire for Hamilton’s continued company, friendship and love in future years. In a letter of 1807, Anna Maria in fact writes to John Dickenson, to congratulate *him* on his wife’s birthday, with a poem entitled ‘To Mr Dickenson on the Birthday of a certain Lady 5th. of February 1807’. The poem is followed by a letter addressed to Mary herself in which Anna Maria writes ‘as you desire me not to criticize your elegant & most acceptable presents so I trust you will allow for my inability in humbly endeavouring to celebrate your Birth-day but my desire to shew you my unfeigned affection & esteem dictated the Lines on this sheet’ (HAM/1/10/1/20).

The poem rejoices in the passage of the sun, marking as it does ‘Maria’s years’, and goes on to praise her kindness: ‘If one she knows is wounded by distress/She by her kindness makes the sorrow less./In noble friendship none can her excell [sic]/ I speak who feel for I have known it well […]’. The long friendship Anna Maria had anticipated in 1782 had been maintained a further 25 years, and the long duration of this friendship gives her the authority with which to corroborate Hamilton’s virtues. She closes the poem in wishing the pair a long and happy marriage, and that ‘in Louisa [the Dickensons’ daughter] may you live again’. She closes by affirming her friendship to the couple: ‘accept the cordial wishes of a friend/whose zeal and love with Life alone can end’. 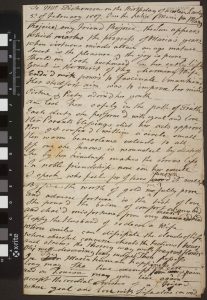 These birthday greetings perform an important role for both John Dickenson and Anna Maria Clark in reaffirming affection, love and friendship, as much as they also offer well wishes to the recipient. The conventional claim of being unable to adequately express what they feel for Mary is not merely (although it is) a pose of modesty, but serves to convey her exceptional virtues through the language of insufficiency. Unlike Martha Goldsworthy, who suspects that her greetings are vying with those of Mary’s other friends, Anna Maria writes to John Dickenson on the basis of their shared affection for Mary, which she shows by celebrating their happy marriage, and – one suspects – teasingly reminding John Dickenson just how lucky he is.