Interrupted by Pirates: or, Lady Charlotte Finch does not trust the Post.

At present, Unlocking the Hamilton Papers is deep in the transcription stage, and we are especially grateful for the hard work of our colleagues at the John Rylands Library on the ongoing digitisation of the Hamilton Archive which has thus far allowed us to continue the project during lockdown.

During the last few months, the PDRA team (Christine, Tino and I) have been transcribing, coding, checking and (where appropriate) annotating the text of hundreds of letters in the Hamilton Papers. The nature of the work is extremely varied and draws on the range of specialisms of the team: at times it demands specialist palaeographical skills to decode and even identify the idiosyncratic hands of Hamilton’s many correspondents; at others, the work is more historical and biographical, populating Hamilton’s social networks (and in turn building the database that will eventually become our ‘Personography’). As the eighteenth-century specialist on the transcription team, I’m as happy as the proverbial with the latter task, drawing on my love of late-Georgian gossip and anecdote, piecing together this who’s-who of court culture and their connections to leading public and intellectual figures of their day. It’s also been an exercise researching diverse aspects of eighteenth-century history, testament to how the daily lives of Hamilton’s many female correspondents were connected to major global and political events. More importantly, I am assured by the highest authority (Tino) that my knowledge of the 4th Anglo-Dutch War now rivals that of the average Dutch school child, thanks to a passing reference to ‘the Texel’. Needless to say the task of transcription is at times a little circuitous. How does all this connect to this month’s blog post, then? Well, that’s circuitous too, but stay with me. 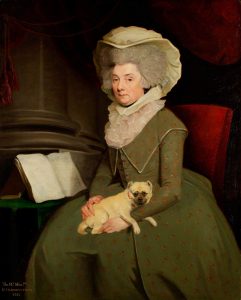 I wanted this post to convey the richness of the letters as we have encountered them since joining the project in December, and the glimpses into eighteenth-century life they have revealed so far, through focusing on an individual correspondent. Over the last month, we have been transcribing correspondence from Lady Charlotte Finch who, like Hamilton, was a governess to the royal children. Part of the joy of working with the Hamilton Papers is their capacity to throw up the unexpected, and Lady Charlotte’s letters are no exception. What the archive brings to life is the vibrancy and flexibility of the ‘domestic’ as a conceptual space, and the ways in which women’s lives, networks and imaginations extended beyond the private and into the excitement, chaos and at times dangers of public life that they were supposedly shielded from. The material nature of the archive reveals itself in particular ways. For example, the cataloguing of items by correspondent results in a kind of intimacy with their writer by the end of a transcription run. It lends a sense of the historical situatedness of the writer: their correspondence can stretch across years, cities, nations and continents. It is also a reminder of how letters circulated as objects: firstly, that they do not always reach their intended recipients, or stay with them; and secondly, that posted letters are not necessarily immutable or authoritative texts, as their recipients or later custodians can both clarify and obfuscate, according to their priorities. Finally, and most tantalisingly, the material that survives to become the archive bears the marks of risk and uncertainty in its inherent incompleteness: the archive is never finished, and its contents relate to things (other letters, other events, other people) beyond its scope, as Lady Charlotte’s correspondence demonstrates.

In June 1781, Lady Charlotte wrote to Royal Sub-Governess Marth Goldsworthy from Caldas, where Finch had gone to nurse her son, Lord Winchilsea. This letter reflects on the likely delays or miscarriages that attend international exchanges: Finch expresses her frustration that her daughter, Sophia Fielding, has happened to leave for Lisbon in order to catch the ‘Packet’ to Falmouth, not knowing that her husband was travelling to meet her:

She saild the 17th. and he got into Lisbon the very next day. had they but deferr'd their sailing for a few hours, she would have receiv'd a Letter from him by the Packet informing her he was coming, and of course it would have stop’t her going. I cannot tell you how vext I feel about it, for I'm sure it will be a sad Mortification to her when she knows it, as it was a very great one to him to find her gone.

Mrs Fielding’s journey to Falmouth is itself instrumental in this faulty correspondence network, as Lady Charlotte says she has charged her daughter with

'Letters from me to their Royal Highnesses, which I hope she will have had the honor of delivering before this reaches you. I write by this same packet to Miss Hamilton, but beg you will charge yourself with kind remembrances from me to Every body else. I am in some fear that your next Letter may be directed to Mrs. Fielding and I of course shall not get it, as hers are all order'd to be stop’t at Falmouth now She is gone, if it should be so, and you recollect any thing in it that was meant to me, I must beg you will be so good as to repeat it. (Charlotte Finch to Martha Goldsworthy, 23 Jun 1781, HAM/1/12/29 [link to provisional transcription]). 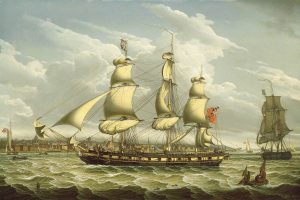 Mail packets were sent from Britain to its embassies and outposts by the Post Office Packet Service, which also accepted foot passengers, gold bullion and private goods on its scheduled sailings. This service continued, increasingly unreliably, until it was taken over by the Admiralty in 1823. Lady Charlotte’s expectation that letters may be mislaid is justified, and not simply due to the possibility of missed connections: with Britain almost continuously at war throughout the eighteenth century, these ‘Packet Ships’ were not always reliable, as they were engaged by enemy warships or privateers and often captured as a result. This was exactly the case of the Packet Mercury boarded by Sophia Fielding on 17 June 1781, which was captured by an American Privateer shortly after leaving Lisbon.

Although Lady Charlotte began her letter on 23 June, she doesn’t get an opportunity to send it before news reaches her of the capture of her daughter’s vessel on the night of the 3 July. This is a full fortnight after her daughter sailed from Lisbon. On 4 July, she therefore ‘adds a few lines’ to her letter ‘to acquaint you with the distressing and mortifying intelligence we received last night, of the Mercury Packet being taken that was carrying Mrs Fielding.’ (HAM/1/12/29). News of the incident reached the British papers in August:

it is reported that the Mercury pacquet, Capt.Dillon, taken by the Cicero American privateer, Capt. Heil, of 20 guns, fix and nine-pounders, had 7000 Moidores on board […] Lady of Commodore Fielding, Lord Winchilseas Sister, being taken on board the Mercury packet, by an American privateer, and carried into Vigo. The same letters add, that Lady Charlotte Finch and Lord Winchilsea are yet safe at Lisbon. (The Leeds Intelligencer, 7 August 1781, ‘Thursday’s Post’)

Indeed it was probably Lady Charlotte’s letters that carried this information, as she wrote to Hamilton at greater length of her daughter’s ordeal: ‘the horror of finding what hands they were fallen into was very great, but thank God they have met with humane Treatment from them, and they have landed them at Vigo’ (a pleasing coincidence for team Hamilton as the home of our very own Nuria!). Understandably, Lady Charlotte is now concerned about her own safe return to Britain, as

how my dear Miss — , I am to get home with safety, now the seas are so infested I do not know. A Land Journey would ruin my finances, besides the difficulties of travelling through Spain & Portugal, and the tedious time it would take, and as to the Packet I certainly now can never Venture it. (Charlotte Finch to Mary Hamilton, 4 July 1781, HAM/1/12/32).

Lady Charlotte’s own delayed return, interrupted by pirates, brings me neatly back to our experience of transcribing her letters, at times frustrated by missed connections or missing correspondence, lost to the vagaries of international communication as much as individual will. The impact of ongoing war in the Atlantic world is felt from the dramatic capture of her daughter by privateers, to a pleasant encounter at Deal with commanders who have been blockading the Dutch (HAM/1/12/40). In transcribing and annotating her letters, these diversions and interruptions (hunting down a newspaper report, researching a battle, combing parliamentary records) remind us of precisely what these women’s lives consisted of, and what we can offer in unlocking (*ahem*) the archives they have left behind.