The Ins and Outs of Letters

In our February blog post, Christine Wallis explores the stories told by outsides, wrappers and envelopes.

Throughout this project I’ve become just as interested in what the outsides of letters have to tell us about the lives of Hamilton and her circle, as I have in the text on the insides. In paying attention to evidence concerning the creation and sending of the correspondence in the Hamilton collection I have been struck by the way the practicalities and constraints of carrying letters from their authors to their intended recipients contributes to our understanding of the text of the letters themselves.

The outsides of letters can supply important information which is not always provided in the text inside. For example, they can help corroborate where the correspondents were, or the date the letter was sent. 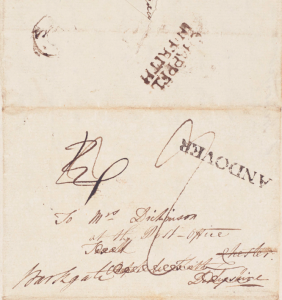 This letter, sent from Elizabeth Iremonger to Mary Hamilton in September 1789 has been redirected: as the Dickensons were away from their home in Taxal, the letter has been forwarded to the post office in Parkgate, a bathing resort on the Wirral.

Postal marks can show the route the letter took: the letter above was stamped at Andover and Chapel-en-le-Frith, while the examples below are from Bath to Taxal via Chesterfield (1) and from St Petersburg to Northampton (2). 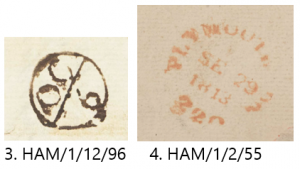 Other marks show the date the letter was received by the post office (3: dated 6th October), and the date and place of posting, along with the number of miles from London (4: Plymouth-London 220 miles, 29th September 1813).

The cost of Postage… 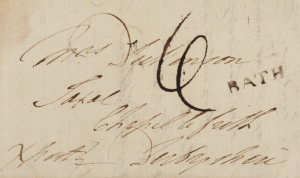 Most letters were not pre-paid, and charge marks show the cost of receiving a letter. In the example below, the large number 6 written across the address shows that in July 1789 Mary Hamilton paid 6d – a substantial sum – to accept a letter from her husband John Dickenson who was staying in Bath for his health. To put this into context, the estimated daily wage for an agricultural labourer in the years 1776-98 was somewhere between 12d and 22d.[1]

In the eighteenth century postage rates were calculated not only by the distance travelled (from 3d. for a letter travelling 15 miles, rising to 8d. for destinations over 150 miles away), but also by the number of sheets posted. Hamilton’s correspondents are generally very careful not to use more than one sheet of paper, and several letters bear the word ‘single’ or ‘single sheet’ on the outside, to prevent postal officials charging double rates for carrying them:

It wasn’t just the comparatively high cost of receiving letters that was inconvenient; there was also the embarrassment of not having ready money to pay the postman, as John complains to Mary during his 1794 stay in Bath:

‘Pray send for Money & let me have some, for so poor
am I at this present writing that I must borrow money
to pay for the postage of your next letter whenever it arrives.
Well I have borrowed the Money & paid postage for the letter.’ (HAM/1/2/37)

Throughout our corpus Mary’s correspondents show that they are acutely conscious of the costs incurred in sending letters, and frequently apologise when sending a letter that will have to be paid for. Voicing a willingness to pay to receive correspondence is one way to demonstrate the value of a friendship, as Charlotte Gunning makes clear in this letter to Hamilton in 1787:

…And how to avoid it

There were, however, ways of sending letters without the recipient having to pay for them. One common way of avoiding paying postage was to use a ‘free frank’. Postage was free for members of parliament, and was provided to bishops and other members of the Lords, in addition to MPs sitting in the House of Commons. However, this privilege was widely abused, and free franks were routinely given to friends and family for use on private correspondence. Although the conditions of use varied and the rules were periodically tightened in an attempt to crack down on their unauthorised use, free franks continued to be popular, and numerous letters to and from Hamilton refer to obtaining and using franks.

To qualify for free postage, the frank signatory was supposed to write the whole address, with his signature in the bottom left corner. In the example below, the signature of William Devaynes MP can be seen: ‘WfreeDevaynes’. After 1784 the signatory also had to write the location and date of posting at the top of the letter – this letter was posted in London on 10th June 1786. 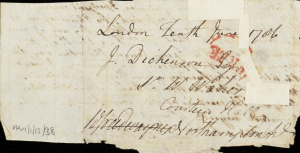 Another advantage of using a frank was that, because postage was free, they could contain enclosures at no extra cost (unlike a paid letter). In HAM/1/13/38 above, Mary Glover scribbles a note on the back, telling John Dickenson ‘[a] letter arriv'd for you yesterday, I postpon'd sending it till to day waiting for a frank’. Although mentioned frequently in our collection, only a small number of franks seem to have been preserved, especially if used only as a cover, rather than forming an integral part of the letter as above. These covers could enclose all sorts of written materials, and another friend, Elizabeth Iremonger, sent Hamilton far more than a forwarded letter with her free franks:

‘And since my return home, I believe
about Two months ago, I divided a Copy of the Rev: Mr- Collier's Sonnets
in Two Franks, & enclosed them also to You, but I am quite at a
loʃs to know whether any of them arrived safely.’ (HAM/1/8/1/4)

‘I have tried & tried in vain for a frank’: The perils and pitfalls of attempting free postage

One drawback to using a frank was that they were to be addressed (and later dated) by the signatory, security features which (deliberately) made them inflexible to use – after all, they weren’t supposed to be used by anyone by the signatory themselves. John Dickenson is amusingly thwarted in his quest for a frank by a friend’s forgetfulness:

‘Mrs. Walkinshaw
promised to get a frank for to day, & has just sent
me word that she has lost the directions — therefore
this must stay till tomorrow.’ (HAM/1/2/8B)

Note that, rather than send a chargeable letter, John would rather wait a day to try to get a frank from elsewhere – a sentiment repeated by several of our writers. Martha Goldsworthy, however, chooses an alternative strategy when faced with the prospect of sending a chargeable letter: she relies on her friend Hamilton, for whom she does have named franks, to forward important correspondence to Charlotte Finch. In this case, sending mail via a trusted third party was preferable to incurring a charge, when a letter was too urgent to wait for an appropriately addressed frank:

‘Will you be so good as to deliver
the enclosed to Lady Charlotte
I expected some Franks from the
Bishop but as he has not
yet sent them I can not
venture to wait & must trouble
you.’ (HAM/1/14/46)

Likewise, Mary is caught out when she hears in February 1773 that her uncle’s regiment may move to another town, as her franks are presumably already written with his current address – a misdirected frank risks being invalidated and incurring a charge. Her uncle’s advice not only shows her how to get round this problem, but also highlights another common practice, whereby a writer would send a number of blank covers (the equivalent of self-addressed envelopes), ensuring that their correspondents would be able (or would feel obliged!) to reply:

‘as to the franks although directed here [Canterbury] you may
do as follows supposing we go to Maidstone or any
other place. The direction to Colonel Napier
gone to Maidstone written by yourself always
passes taking care to just put a stroke only
through Canterbury leaving it legible as I
have done in the inside of the Frank I
send this in to show you the method, they
have always gone safe & free & I have much
experience of it as we change quarters so very
often & as you say you have an opportunity to
get franks get a dozen directed for Your self
as I have but three left after this one nor do
I know where to get any at present no —
Member being in this Country nor likely to be
for some months’  (HAM/1/19/34)

A letter from Hamilton to Charlotte Gunning in July 1783 reveals other ingenious – but not infallible – strategies for obtaining free postage. In the absence of franks addressed to Hamilton, it seems that the pair had devised a scheme to make use of one addressed to their friend, Sir William Wake, but the letter ends up not only being charged for, it is first misdirected to Wake’s house in Essex and then unwittingly opened:

‘I received your letter which had
travell'd into Essex after my Servant had paid 6 pence postage, so
your scheme of Directing to Sir Sir William at my house did not
answer — the post Man insisted upon being Paid, & Mr. Wake
happen'd to call, the Servant gave him the letter — Sir William open'd
it, & Lady Wake sent it to me assuring me he had not read it — now do not imagine I
had not given orders, for I had, & had also told Sir William that
your were to direct your letters to me in that manner.
therefore till I can procure franks enclose to Mr.
Fraser, or your Maid to whom I suppose you have some.’ (HAM/1/15/2/26)

Writers clearly made good use of friends, relations and acquaintances to provide them with a steady supply of franks. Charlotte Finch apologises that ‘my Franker is gone or you should not have to pay for a double Letter’ (HAM/1/12/49), and in fact many of her letters at this time make use of the same signatory, the MP Richard Howe.

Not everyone had difficulty getting franks, though, and Hamilton’s correspondents sometimes offer to put her letters in with their own when posting to a common acquaintance, or report sharing a frank, as Mary Glover notes: ‘I have got a frank for you, A. Maria & myself take it alternately to get them’ (HAM/1/13/32). Franks were highly valued, not just because they saved costs, but also because they were a way of demonstrating regard or affection for the addressee. On one occasion John Dickenson strikes lucky:

‘Mr Charles Greville came in — Mr Hamilton then asked
me if I had been introduced to him — when the Rehearsal
was over, I asked Mr. Greville to do me the favour to frank
2 Covers for me which he did very obligingly.’ (HAM/1/2/8B)

It might seem odd and rather forward for Dickenson to ask such a favour on so short an acquaintance, however Charles Greville was Mary Hamilton’s cousin and the introduction was performed by one of Mary’s uncles. Interestingly, the letter ends abruptly shortly after this – presumably Dickenson continued writing on the cover that Greville gave him, which has not survived.

Considering the insides and outsides of letters together provides a fascinating commentary, not just on who wrote to whom, but also on the value writers placed on correspondence for maintaining ties of friendship, and the lengths people would go to to demonstrate affection and esteem by sending free letters. I will leave the last word on the matter to Charlotte Finch, writing to Hamilton in May 1782:

‘What will you say at the Sight of your Frank so
soon return'd? The Truth is, when I feel grateful I cannot be
Silent, therefore snatch up my Pen the Moment I have received
your Letter, at the risk of tormenting you with a very stupid one,
that I may indulge my self in telling you, how much I feel
your kindness in writing so immediately, &, how much pleasure
I expect from the Continuance of your Interesting Journal.’ (HAM/1/12/38)